Duncan Ross, President of the club welcomed members and guests to hear about all their accomplishments of 2015 and to experience a secretive Big announcement. Going into their 3rd year, the club has already brought together people from the community to support cycling in the region, offer special programs and just to get out and exercise while enjoying our local landscape.

Even though they’ve already accomplished a lot already, the club was ecstatic to announce that they will be building a Bike Park in Waterworks Park! Through funding from Ontario’s Trillium Foundation, the club is looking to start building the park in 2017. The club is also looking to work with more community partners to help support this amazing project.

Councillor Rick Weaver, who is also the club’s Vice President, was happy to announce the project as it will benefit many folks in the community. He commented that it would be great for kids to help get them outside and active. Plus is a great location being close to parking, the existing trail system and the project can be expandable for the future.

After the announcement, everyone was welcome to celebrate with cake and cupcakes provided by Sophia’s Bakery & Cafe. For more information about the club and its projects, please visit: www.brantcyclingclub.com

Make sure to Be Seen riding your bike around our community!

The Brantford Civic Centre was full of booths and people looking for some #BRANTastic Spring improvements all weekend.

Make sure to Be Seen supporting all our local vendors for your Spring and Home needs! 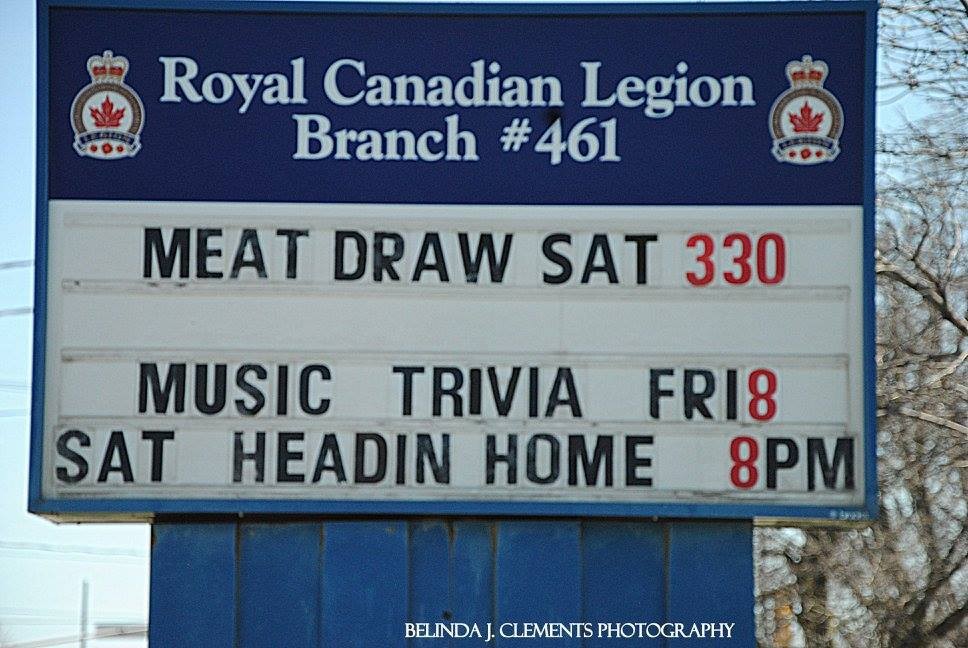 The Royal Canadian Legion on Tollgate Rd. was full of wonderful crafts and items on Sunday, April 17th.

Make sure to Be Seen enjoying springtime in our community!

The Brantford Civic Centre was full of booths and people looking for some‪#‎BRANTastic‬ Spring improvements all weekend.

Make sure to Be Seen supporting all our local vendors for your Spring and Home needs!

To See more of his work please visit: DellisartPhotographix 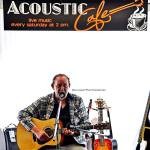 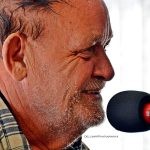 Behind the Scene: Those Damn Divas 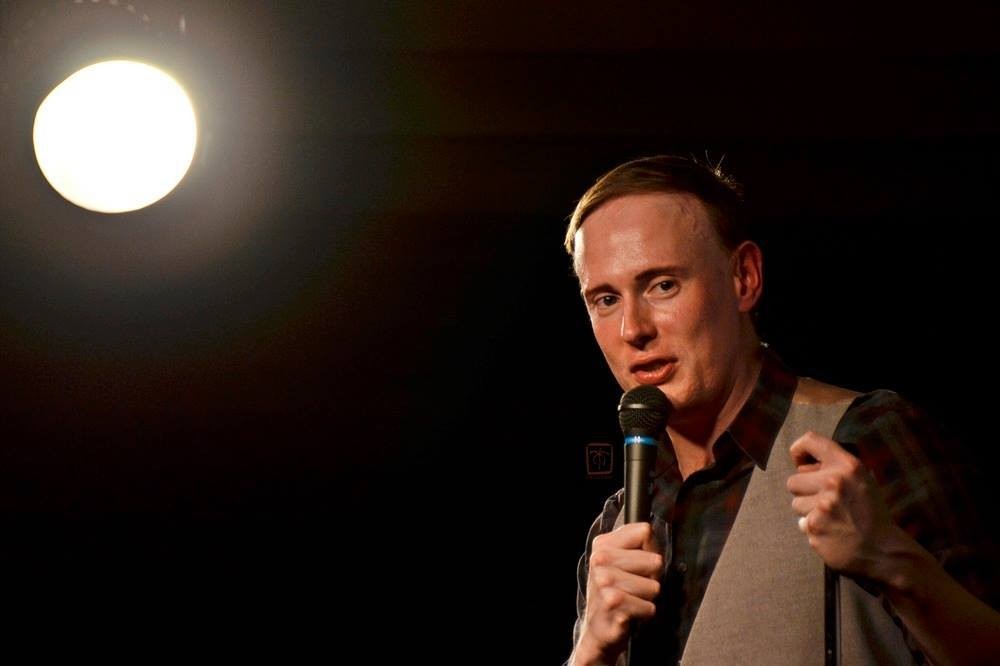 Behind the Scene: Those Damn Divas

A packed ballroom, at the Best Western Plus Brant Park Inn & Conference Centre, is of no surprise when Those Damn Divas is held. Joshua and Dean went Behind the Scene to enjoy the show.

“The show is dedicated to my good friend Sandra Allen who passed away in 2014. Women love to laugh and to have a show dedicated to them and a celebration of women in comedy is important.”

A celebration of women in comedy, Those Damn Divas is coordinated byJamie Stephens Events and was held in support of the Brant Community Healthcare System Foundation.

Hosted by Andrew Johnston who opened the show with his quick wit and charm, causing the audience to laugh and clap and readied them for an evening full of laughter. A few pokes at Jamie, a little about how sorry he was, and how he was sorry for being sorry, a robot babysitter, and it was time for the first act. Cara Connors took to the stage and took control. Sharing stories of the trials and tribulations of teaching first grade; the audience was in stitches. Next up was Nour Hadidi. She started with a story about her heritage and the challenge of having a name that might not be familiar. She moved into relationship stories and the pressures of Arab parents from across the world; the crowd loved every moment of it. Then it was time for Sara Hennessey. No stranger to the stage, she shared stories of her day-to-day life and the humorous situations she finds herself in, with the audience giggling and snorting the entire time.

After a short intermission the laughs began again. Candice Gregoris grabbed the mic and began by recalling a recent trip to the dentist. You can be assured that caused a roar, but the story she shared from her childhood, not only entertained the crowd, but ended with a twist that caused them to audibly gasp and try to retain their laughter. Zabrina Chevannes led the show into its final chapter, capturing the audience’s attention and causing ripples of laughter to erupt. She started with a recent real estate story and then went into tales of her life as a mom and the fun she is able to have raising kids.

Each and every act was a one-of-a-kind experience that you’d just have to witness. I’d highly recommend you try to catch each comedian live or simply Be Seen at the next Those Damn Divas. 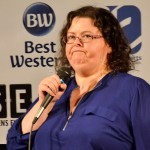 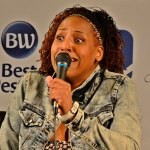 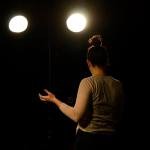 BScene by Dean: Comedy at the Station – April 14 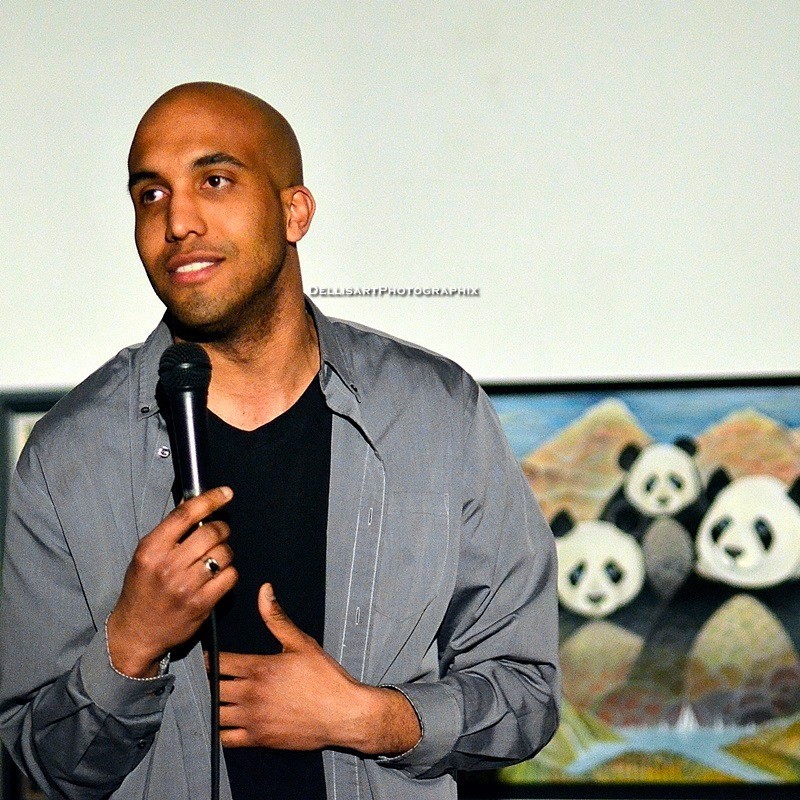 BScene by Dean: Comedy at the Station – April 14

Make sure to Be Seen at The Station Coffee House And Gallery each week for some great laughs!

Photography by: Dean Ellis
To see more of his work, please visit: https://www.facebook.com/DellisartPhotographix/?fref=ts 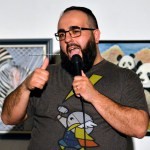 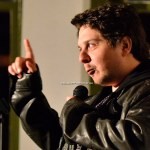 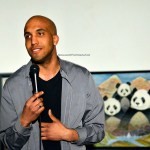 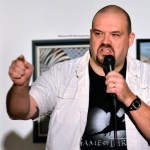 There was anticipation in the air at the Best Western Plus Brant Park Inn & Conference Centre on Thursday, April 14th as many gentlemen gathered to vote on the next organization to receive a large donation.

All three presenters gave wonderful speeches for their chosen organization, making the night a very tight race. After the votes were all counted, the winning organization was the Alzheimer’s Society! With the funds raised, they will be looking to build their Music for Memory program and hire a summer student to help out.

Congratulations to the winner and thanks to everyone for being involved! Make sure to Be Seen supporting our many wonderful, organizations!

The Starving Artist Gallery Cafe was the place to be on April 13 as laughs filled the entire space for the Hump Day Interactive!

Make sure to Be Seen laughing during the next show!

Sandra On Scene: I’LL BE BACK BEFORE MIDNIGHT

Sandra On Scene: I’LL BE BACK BEFORE MIDNIGHT

BScene was pleased as punch to be invited to a rehearsal of Paris Performers’ Theatre’s (PPT) next show I’LL BE BACK BEFORE MIDNIGHT, a suspenseful comedy/thriller by Canadian playwright Peter Colley, directed by Linda Lloyd-McKenzie. This is the final show of PPT’s 25th Anniversary Season.

Jan has recently had a nervous breakdown, so her husband Greg has rented an old farmhouse in the country where she can recover. When George, their jovial farmer landlord, tells stories about a terrible murder that once took place in the farmhouse and the ghost that reputedly stalks the night, Jan’s imagination run wild. After Laura, Greg’s manipulative step-sister arrives, Jan soon finds herself tormented by strange sounds in the night, and visions of the vengeful ghost. Is she having another breakdown? When she tries to defend herself from this apparition, events take an unexpected turn in a night of unimaginable suspense.

Peter Colley’s roller-coaster play contains the kind of stomach-dropping twists that will make you hoot with laughter even as you clutch your theater companion’s sleeve. There’s something scratching at the window behind those dusty draperies, and finding out what horror lurks is all part of this entertaining production’s fun.
Director Linda Lloyd-McKenzie says, “There are lots of sound effects, chilling ominous music and things that go bump in the night.” She says this play is a step in a different direction for PPT, which usually does comedies. “It’s a chilling suspenseful play.” She says she feels really good about the play and its cast. “They are really good to work with.”

McKenzie previously directed THE TOMORROW BOX by Anne Chislett and SELF-HELP by Norm Foster for Paris Performers’ and will direct HARVEST by Ken Cameron for their 2016-2017 Season.
Paris audiences will recognize veteran actors Jessica O’Connor as Jan, Roger Smith as Greg, and Deanna Stevens as Laura. Martin Smith, a newcomer to PPT, rounds out the cast as George.

O’Connor plays Jan, the character that much of the play’s actions centers around. She says, “This is the first play I have been in with PPT that doesn’t have the worked Love in it.” She was recently in LOVE, SEX AND THE I.R.S. and LOVE LOSS AND WHAT I WORE.

Roger Smith says he is happy to be back in another PPT spring production. He performed in GLORIOUS in 2015. “This play is a little out there for me, a little different,” he says.

Stevens says this is a play she almost wishes she wasn’t in because she wants to see it. “I am glad to be doing it,” she says. “I have never done a thriller.”

Martin Smith has done most of his work with ICHTHYS Theatre since he moved to the area almost four years ago. He most recently wrote/produced/directed THE OTHER NOISE for ICHTHYS.

“Although there are lines that need to be learned, acting is much easier,” he says. “I’m looking forward to working with them. (PPT)” He plays the friendly, amusing farmer neighbor who rents out the house to the couple.

Most PPT plays have various set challenges and this one is no exception. Set and Props people are working on a wood stove that blows up, windows that blow open, a serving hatch that crashes down and what is being described as a “contraption” …a spring loaded device that manages to break things on purpose.

I’LL BE BACK BEFORE MIDNIGHT runs May 27, 28, and June 2, 3, 4 at 8pm. Sunday matinees are May 29 and June 5 at 2pm with all performances in the Special Events Building at the Paris Fairgrounds. Tickets are $18 each, or $15 each for groups of 10 or more. Advance Tickets are available at Green Heron Books in downtown Paris, (beginning May 1) or may be reserved by phone at the box office: 519-302-0169. Tickets will also be available at the door. Doors open one hour prior to the performance so patrons can come early to view displays, visit the bar and purchase 50/50 tickets.

In keeping with their 25th Anniversary celebration, Paris Performers’ Theatre is offering a dinner/theatre package for the May 27th show with dinner catered by the Paris Agricultural Society at the Fairgrounds prior to the performance. As well, a brunch/theatre package in conjunction with Stillwaters Plate and Pour, Paris will be available for the June 5th matinee. Patrons are to brunch at Stillwaters, then come to see the play at the Fairgrounds. Tickets for both packages are $35 and must be purchased in advance.
Due to scenes with violence and risk, this show is not recommended for children under 16 years.
For more information, please visit: www.parisperformers.com

Make sure to Be Seen enjoying this local production!