BScene by Dean: Marc Jordan at the Sanderson Centre April 27, 2016

BScene by Dean: Marc Jordan at the Sanderson Centre April 27, 2016

This may seem like an odd question to start with here but…. What do Rod Stewart, Cher, Josh Groban, Holly Cole, Bette Midler, Diana Ross, Susan Aglukark, Natalie Cole, Joe Cocker, Kansas, Jeff Healey, Manhattan Transfer, Kenny Loggins, and Chicago all have in common? Oh, I forgot the movie “The Perfect Storm and the TV hit “Dawsons Creek”, they should also be on the list as well.

Every name here has used a song written by Canadian singer songwriter Marc Jordan. Marc is a Toronto based Juno award winning singer songwriter that you have been listening to for decades. The list that I gave you here is just some of the people and groups and productions that have utilized this man’s immense talents in their own careers. You may remember the song ‘Living in Marina Del Ray’ from a few decades back; that was his first big single. How about ‘Rhythm of My Heart’ that was big for Rod Stewart, or ‘Fall from Grace’, coming from Amanda Marshall. All of these hits came from the same man; all totaled there are over 35 million records out there with his name on them in one capacity or another.

The four decades that he has been in ‘the business’ has led to an interesting life and from that some interesting stories along the way, some of these he shared with us at the Sanderson, along with some of his music as well. Along the way he’s picked up some acting prowess and has also begun another career in the visual arts as well (he had three of his works with him at the Sanderson). The night was an enjoyable one for everyone present, an interesting one as well, with the stories and anecdotes coming out of a career that just never seems to slow down and it doesn’t look like it’s going to anytime soon.

If you ever get the chance to see or hear this Canadian Icon perform or in this case speak, please do it , because if you don’t you’ll really be missing something.

To see more of his work please visit: DellisartPhotographix 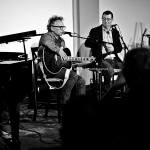 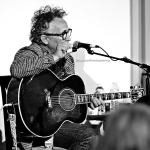 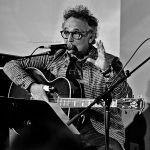 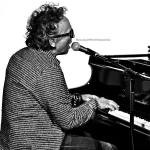 Cat in a hamper. Or a wormhole. BScene by Dean: Reflections Opening with Cory Mercer Music and Cody Woods at The Starving Artist Gallery Cafe April 29, 2016