The night was billed as a Comedy Roast Battle, something new to the Brantford area. Well it started out that way but then it began to mutate into something different. It’s hard to describe what was going on but it was pure entertainment for everyone present.

First little oddity was when an audience member ended up doing a bit of ‘roast battle’ with the host Chris Jarvie and they were quite good together. The next ‘thing’ was a comedian on stage to do battle but his opponent wasn’t there so he just did some stand-up until the missing combatant walk in the door and joined in the festivities on stage. The final pair to ‘get it on’ for us got so caught up in what they were doing there was just no stopping the avalanche of verbal stabs and jabs that were coming out of them. There was no way to decide who was the winner here except for us the audience, because the ‘battle’ between these to comedic veterans then morphed into the final act of ‘Tag Team Comedy’ that had everyone in stitches.

There was no true winner in the battle tonight but it sure was something to experience anyway.

Make sure to Be Seen at The Rose And Thistle for some great food and even greater laughs!

Submitted by: Dean Ellis
To see more of his work, please visit:https://www.facebook.com/DellisartPhotographix/?fref=ts 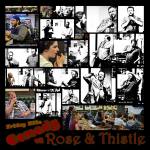 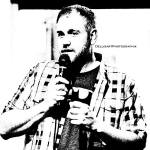